The Deaf Can Compete in Dancing With the Stars

Did you get a chance to watch season 22 of Dancing With The Stars?  The final winner was Nyle DiMarco, a model and deaf activist.  Here’s a clip of his final dance, appropriately performed to The Sound of Silence, which is what Nyle hears every day.

Thanks to advances in technology, deaf people are able to enjoy dancing of all types, performing, competition, classes, and social.  Technology is also allowing the blind to compete in marathons.

Disabled Can Compete with Aid of Technology

As choreographer Chris Fonseca teaches me a dance routine, the beat of the music is pumping through me. 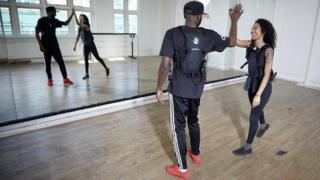 But not through my ears. I’m wearing a SubPac, which is strapped on to my back and allows me to feel the beat of the music as it thumps through my body.

Chris is trying to replicate what it would feel like if, like him, I were deaf. And this is his aim – to give the opportunity for deaf dancers in his classes to feel the music so they can learn his choreography with ease.

The SubPac, which is widely used in the music world to help music producers feel the music without damaging their ears, works by transferring low, bass frequencies directly to your body, providing the physical dimension to sound.

And technology is giving people with all kinds of disabilities the chance to stay active and keep fit.

Take Simon Wheatcroft, who lost his sight at 17.

Simon was born with the genetic degenerative eye condition retinitis pigmentosa (RP), which causes gradual deterioration of the retina. But that hasn’t stopped Simon becoming an ultra-marathon runner.

“I started running for something to do. I used a guide dog to run outside or went running with other people,” he says.

He has run the New York marathon and many much longer races, normally with a human guide. But what happens when you want to run solo?

In a bid to do a 155-mile ultra-marathon in the Namibian desert this May he turned to IBM Bluemix – the tech giant’s app development arm – to help him create an app.

Called eAscot after his guide dog, the app uses sensors, similar to car parking sensors, and satellite navigation to help him stay on course.

Paralympians, too, are using technology to help them compete at the highest level. read more at bbc.com

May technology continue to advance to liberate the formerly limited to compete in any and every activity.